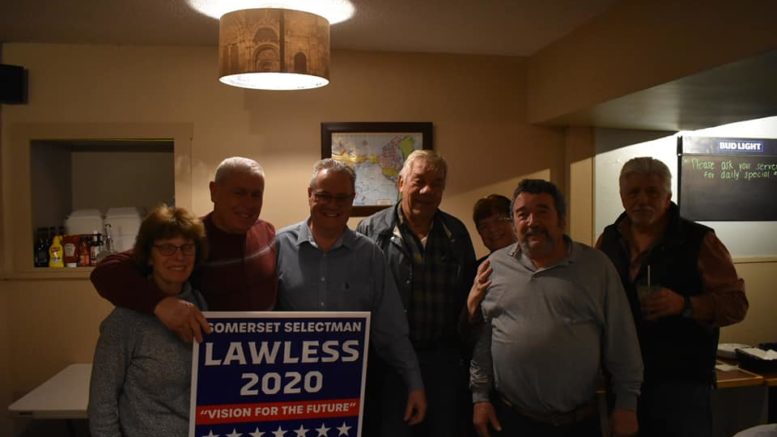 REMEMBER THE PAST The Somerset Democrat Committee Political Machine Political QUID PRO QUO, PATRONAGE, PROPAGANDA, NEFARIOUS, CRONYISIM, NEPOTISM, GRAFT. Is the experienced candidate  doing a job for you or is he/she doing a job on you? He/she’s doing a job on you again. I ask that you vote for a “Fresh Select-Man” for Board of Selectman and “Fresh School Committee-Woman” for School Committeemen who will do the job for you. You Have A Choice To Vote To Elect 2 Old Recycled Incumbent Candidates Little Thief Davey Entertainer Dancing Farmer Berube &  X-Selectman OPPORTUNIST OUTLAW LAWLESS Lorne “Lonnie Outlaw” Lawless for Selectman Or 1 New Challenger Candidate Chris Carpenter and Jess Machado for School Committee.  Look To The Future For Solutions For The Present Time And Not Noise From The Past For Problems. The Formula Is That Simple “(aX+bY=c0) a X-Select-man + b Y-Committee-man = c 0 Failed Flunky Results”, PERIOD…..

Diane Lawless, who served as Tax Collector in Seekonk from April 1987 to April 1995, (8 years) FIRED

1.) OUTLAW LAWLESS NEVER EVER ….Lorne “Lonnie Outlaw” Lawless = Proven track record from when he was a Selectman from 2007-2010“QUID-PRO-QUO MORE LIKE QUID-PRO-OUTLAW LONNIE LAWLESS

2.) OUTLAW LAWLESS NEVER recommended insurance was not the town’s health insurance. It was for the town’s auto insurance to annually have the Towns insurance go out to BID. Because former Somerset School Committee Member Brian E. Murphy has all of the auto and other insurance in town. OUTLAW LAWLESS did this because he was not the insurance agent; it was Brian E. Murphy another conflict of interest just like with William “Billy” Meehan with having the Somerset School Department food contract and violating the sealed bid to under bid as Somerset Selectman.

3.) OUTLAW LAWLESS NEVER was one of the selectmen during the recession that put a hiring and wage freeze to control the tax rate for residents during the challenging financial & economic crisis.

6.) OUTLAW LAWLESS MADE SURE WOMEN WERE REMOVED FROM LEADERSHIP POSITION AND THAT’S GENDERISM On August 1, 2007 OUTLAW LAWLESS recommended, supported and voted with William “Billy” Meehan to remove Eleanor Gagnon the very 1st woman on the Somerset Board of Selectmen to be removed as Chairman. But that did not stop Lorne “Lonnie Outlaw” Lawless he made sure his cronies and hack friends helped him with his GENDERISM removal of two more duly elected females because his wife Diane “Outlaw” Lawless lost to Lisa Vienna for Somerset Tax Collector in 2004, Diane “Outlaw” Lawless lost to Kathleen Saraiva Trafka for Somerset Treasure in 2011 and they changed both separate elected treasurer and tax collector to combined appointed treasurer/tax collector. Because if OUTLAW LAWLESS’s wife could not be in charge by being elected then she would be in charge by appointment and NO WOMAN can be in leadership other than Diane “OUTLAW” Lawless.

7.) OUTLAW LAWLESS’S PATRONAGE MADE SURE his CRONIES & HACK FRIENDS on the Board of Selectmen Baker Pork Pie Donnie Con Casino Don Setters, Carpenter Roofer Scottie Captain Asbestos-Mold Lebeau and Entertainer Farmer Davey Little Dancing Thief Berube that they changed both separate elected treasurer and tax collector to combined appointed treasurer/tax collector and was hoping that they would hire his wife Diane Lawless for the position because she lost. But that never happened because Murphy’s Law reported it when it happened.

8.) OUTLAW LAWLESS’S PATRONAGE MADE SURE “ONE OF HIS MAJOR Campaign Committee Surrogate Supporter Donald Ranger owner & Operator of Somerset Marina his tenant “George McNeil was appointed Somerset Chief Police by his HACK FRIENDS on the Board of Selectmen
Baker Pork Pie Donnie Con Casino Don Setters, Carpenter Roofer Scottie Captain Asbestos-Mold Lebeau and Entertainer Farmer Davey Little Dancing Thief Berube. OUTLAW LAWLESS was appointed to the Somerset Police Chief Search Committee. Again Murphy’s Law reported that 6 weeks before anyone in Somerset knew who any of the candidates were. Because Outlaw Lawless was hanging out at Somerset Marina with the owner & operator Donald Ranger, his tenant who became Somerset Assistant Harbor Master Dennis Mello and tenant who they had apply for the position of Somerset Police Chief George McNeil. When Outlaw Lawless had a CONFLICT OF INTEREST and was never ever supposed to be around any applicant and he was. Because George McNeil’s BOAT was right on the side of Murphy’s Law’s BOAT and I saw it all. But that really did happen Murphy’s Law reported it when it happened.

9.) OUTLAW LAWLESS’S PATRONAGE MADE SURE his HACK FRIEND on the Somerset Board of Selectmen Carpenter Roofer Scottie Captain Asbestos-Mold Lebeau he reached out to his friend Richard Brown (Freetown, Ma Town Administrator from January 2012 to June 30, 2014) and he became (Somerset Town Administrator from April 23, 2015 to present) to HIRED his wife Diane Lawless and was appointed Freetown, Ma Treasurer-Collector (from July 2013 to June 22, 2015, 1 year, 9 months) FIRED. When Richard Brown Was Appointed Somerset Town Administrator with the HELP of Scott Lebeau , Lorne Lawless and Diane Lawless they all were hoping that Diane Lawless was going to be appointed to her DREAM POSITION that her husband worked hard for her to get as Somerset combined appointed treasurer/tax collector for Diane Lawless for that position because she lost both the separate elected treasurer and tax collector. But that never happened because Murphy’s Law reported it when it happened.

10.) OUTLAW LAWLESS NEVER was part of the organized opposition to an LNG terminal proposal at Weaver’s Cove in Fall River that never was built. It was done by Joseph Carvalho President of Coalition for Responsible Siting of LNG Facilities and led the citizen’s opposition to the siting of an LNG terminal in the North End of Fall River, Ma which resulted in the company pulling their permits to construct the facility.

11.) OUTLAW LAWLESS he owned two FAILED businesses in Canada and currently works in commercial insurance, BECAUSE IN 2010 OUTLAW LAWLESS RAN FOR TWO POLITICAL POSITIONS, one was as an incumbent for Re-Election to Somerset Board of Selectman and FIRED to challenger Arastou “Stu” Mahjoory, two was as a challenger for Election to Massachusetts State Senate 1st Bristol and Plymouth District and LOST to challenger Massachusetts State Representative 8th Plymouth district Michael Rodrigues and AGAIN THIS STILL would NOT help OUTLAW LAWLESS to understand issues related to POLITICS for the TOWN OF SOMERSET.

DOES SOMERSET REALLY NEED ANOTHER OUTLAW LAWLESS IN SOMERSET….. I DIN’T THINK SO!!!!!

End Waste, Fraud and Abuse By Draining The Somerset Swamp And Not Voting To Elect Swamp Creatures And Swamp Things Of The Town of Somerset Democrat Committee, Rump Swabs Hacks and Moon Bats Beware…..