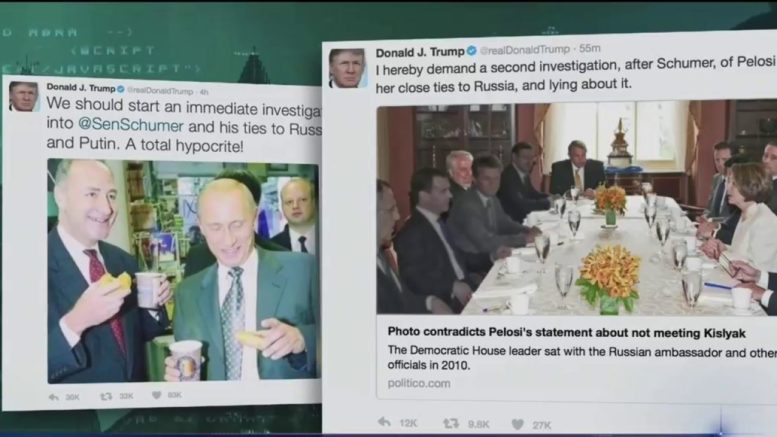 The 1st Deep Throat FBI Associate Director William Mark Felt Sr. TowerGate Scandal was on Friday March 03, 2017 and Thursday June 08, 2017. The 2nd Deep Throat was Fired FBI Director James Brien Comey Jr. As Deep Throat-2 whispered to his friend Daniel C. Richman, a professor at Columbia University’s Law School best known as an adviser to Comey to share the contents of his FBI Memos on a special counsel. Maggie Haberman, Glenn Thrush, Michael S. Schmidt and Peter Baker, conversations with President Donald Trump with a New York Times reporter to prompt the appointment of investigative journalist, “Follow the money”, “Just Follow The Money” to break the TowerGate Scandal is where we need to go.

On Friday March 03, 2017 Breaking News report about Barack Hussein Obama, June 2016 FISA Warrant denied and October 2016 FISA Warrant granted and Unmasking L.t. General Michael Flynn and FBI Warrant into Russian Banks Alpha Bank and SVB Bank. Why? A 3rd rate FISA Warrant and unmasking of L.t. General Michael Flynn called TowerGate had become something much, much more. The two reporters of Circa News and the one reporter of The Washington Post who broke that story, who worked that story, who educated America about Barack Hussein Obama and TowerGate Sara Carter and John Solomon of Circa News and David Ignatius of The Washington Post.

Deep Throat Fired F.B.I. Director James Comey is the leaker and the one who covers –up for Clinton and Obama deals with Russia, China and Ukraine and tells lies about Trump and TowerGate.

Fired U.S. Secretary of State and loser Democratic President Candidate Hillary Diane Rodham Clinton was selling U.S. Information and her 33,000 emails for her private company the Clinton Foundation and the Clinton Global Initiative “Pay to Play” trader, treason, muntiny and spying for foreign intelligence and giving Russia, China and Ukraine and unclassified, classified, confidential, secret, top secret files, documents, records. This is a violation of both Foreign Intelligence Surveillance Act (FISA) of 1978 and The USA Patriot Act of 2001.

On June 8, 2010 Hillary Clinton gave 20% of the U.S. uranium to Russia $1.3 Billion Dollar DEAL for a “quid pro quo” deal giving Russia ownership of one-fifth of U.S. uranium deposits in exchange for $145 Million Dollars in donations to the Clinton Foundation.

Obama, Hillary, were happy to be subservient to Putin. Obama on the open mic, “Tell Vlad I’ll have a lot more flexibility after the election,” meaning to get rid of American nukes at a more rapid rate.

The coordination between Clinton allies and Ukrainian government officials who hoped to see Clinton win the 2016 election.

A veteran DNC operative and Democratic Party Consultant and proud Ukrainian-American who previously worked in the Clinton White House, Ukrainian-American Alexandra Chalupa, worked with Ukrainian government officials and journalists from both Ukraine and America to dig up Russia-related opposition research on Trump and Manafort. She also shared her anti-Trump research with both the DNC and the Clinton campaign.

DNC encouraged Chalupa to try to arrange an interview with Ukrainian President Petro Poroshenko to talk about Manafort’s ties to the former pro-Russia president of Ukraine, Viktor Yanukovych, whom Manafort previously advised.

Ukrainian government officials tried to help Hillary Clinton and undermine Trump by publicly questioning his fitness for office. Ukraine supported Clinton and they were involvement in leaking false information about Trump during U.S. Presidential Election and Ukraine medaled in the U.S. Election process.

Natalia Veselntiskaya has ties to Fusion GPS, a firm which is based in Washington DC and was established by former Wall Street Journal reporters Glenn Simpson and Peter Fritsch that was retained by Democratic operatives to develop opposition research on the President and which commissioned the phony “oppo research dossier” “Steele dossier.” containing unproven and often salacious allegations about Mr. Trump. The Company had originally been hired by Republican rivals of Mr. Trump during the primary campaign. After he secured the party’s nomination, the company was instead paid by Democratic financial supporters of Ms Clinton. In the summer of 2016, GPS hired former British intelligence agent, Christopher Steele, to help their work.

We have proof that the Ukrainians were trying to sabotage Trump. We have proof that they were trying to help Hillary Clinton and that when Trump wins, they backed off, they begged forgiveness and wanted to become friends with Trump so that he would not pay them back. Ukraine tried to sabotage Trump, Ukraine was helping Hillary, Ukraine publicly stating Trump was unfit? So there was collusion between Ukraine, a foreign government, a foreign country. There was collusion between Ukraine and Hillary Clinton to sabotage Trump.

Clinton’s son in law Marc Mezvinsky Co-Founder of the hedge fund Eaglevale Partners, Eaglevale Hellenic Opportunity Fund is said to have lost nearly 90 percent of its value, which equated to a 90% loss to investors. In December 2016 Eaglevale Partners closed.

On June 2016 Donald Trump Jr. meet with Russian Lawyer Natalia Veselntiskaya is a managing partner in Kamerton Consulting, a Moscow Law Firm who said she had damaging information about former Secretary of State Hillary Clinton from the Russian government.

Natalia Veselntiskaya has represented Denis Katsyv, a Russian national accused of laundering millions in tax-fraud proceeds into US real estate last year in a case brought in the southern district of New York. Katsyv’s case was settled in May for $6 million. The tax fraud was originally uncovered by a Russian accountant for Hermitage Capital, Sergei Magnitsky, who was arrested and died in a Russian jail after his arrest. In sanctions passed after his death, the US froze assets of Russian investigators and prosecutors involved in the accountant’s detention.

Veselnitskaya has been lobbying for the Magnitsky sanctions to be lifted. She represents state-owned companies in court, and is married to a former deputy government minister.

The meeting was all about adoption policy and the Magnitsky Act, A US law that blacklists several Russians linked to the 2009 murder of another Russian lawyer, Sergei Magnitsky. Donald Trump Jr. did not pay any money or anything of value for the meeting and did not receive any information for what the meeting was supposed to be about.